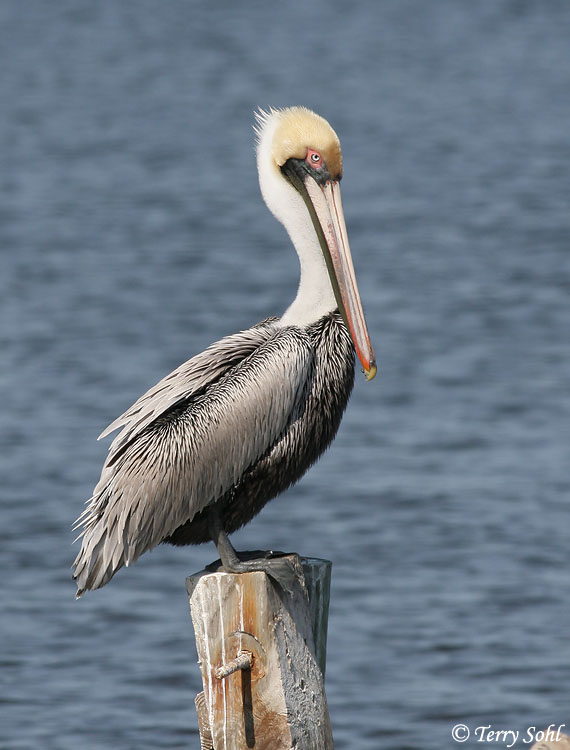 On Scuba San Diego’s “Snorkel Adventure” ( www.snorkeladventure.com) the Brown Pelican is often doing a low-at-the- surface flyby of us on our way to the La Jolla Sea Caves.  Was Listed as an endangered species June 2, 1970 and it was delisted on November 17, 2009.  Interestingly the symbol of the United States, the Bald Eagle was listed on the endangered species list along with 36 other birds (most of them in Hawaii) in 1967.

The reason for the incredible decline in the Pelican population of the west coast of the USA was found to be due to a massive (50%) reduction in Calcium carbonate in the shell walls that made the shell to thin to survive e the weight of incubation. Almost all eggs had in fact collapsed during incubation.

Further studies identified the reason for this to be 1. A pesticide called DDT (Dichlorodiphenyltrichloroethane) and, 2. The decimation of the anchovy populations by commercial fisheries.  However the primary reason for endangerment of the California brown pelican was determined to be DDT.  Research pretty much proved beyond a doubt that it was deadly to all populations of fish eating birds. As the fish the pelicans eat are at the bottom of the birds food chain these fish super concentrated the poison in their fatty tissue which resulted in high concentrations of it their major predators.

Rachel Carson’s book Silent Spring was a driving force behind the banning of DDT in 1972 in the USA except for emergency use against bubonic plague carrying fleas and tic investigations.  Her tome called to attention the many harmful effects on animal and insect life on the planet and she almost singlehandedly started the environmental movement with her book which did not limit criticism to just the chemical DDT.   In spite of the ban in the USA, companies making it sold over 7,000 tons abroad through 1985.

There are currently estimated to be well over 200,000 birds in California up exponentially since the banning and sale of DDT in the United States.