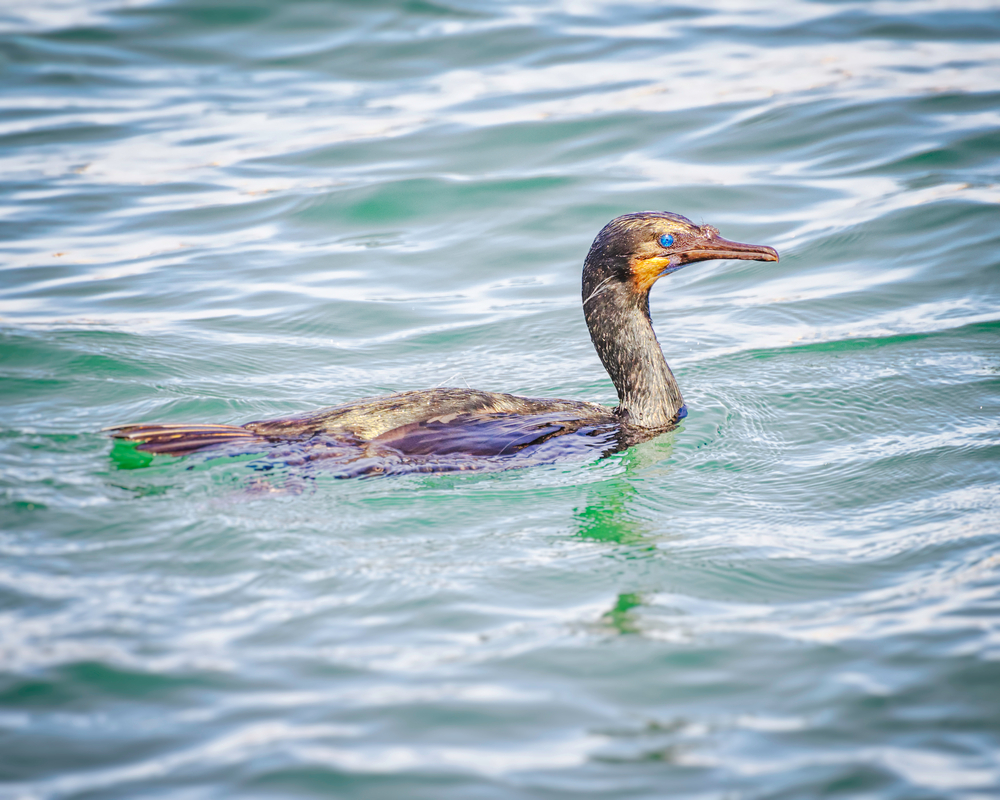 Diving and snorkeling San Diego’s La Jolla Cove Ecological Reserve we often see the Brandt’s Cormorant both on the cliffs, in the air and underwater.  The “Cove” often has flocks of several hundred of these diving shore birds as more or less permanent residents.

There are several reasons for this.  As a ecological reserve there is plenty of food for these birds in the protected bay.  Also, the very vertical cliffs tunneled with the sea caves we snorkel too and dive inside are natural safe roosting and nesting places for these birds.  The cliff heights range as high as 100 to 350 feet in places from Sorrento Valley to La Jolla Cove. In the spring almost every rocky outcropping along the cliffs and the Cove sport a nesting pair of these graceful flyers.

Sexually mature birds have a cobalt blue pouch or gullet.  In the sun on hot days they will be seen head up flapping their pouch which is a strategy to cool the birds blood as the pouch is full of capillaries.

Like all birds their bones and feathers are flexible and hollow.  Since sea water weighs 64 lbs. (29 kg.) per cubic foot, as the Cormorant descends the air in these spaces begins to compress from the weight of the sea water accumulating on top of them.  They have adapted to this compression by means of air bladders that the compressed air is shunted to as they descend.  This compression reduces their volume and density is therefore increased with every foot of depth. They are actually buoyant down to around 45-50 feet, neutrally buoyant about 45-60 feet, and negatively buoyant below 60 feet.

We have seen these birds as deep as 130 feet search the sea floor for invertebrates and small fish.  Once on a very poor visibility day underwater a La Jolla Canyon I caught one that spooked me as it swam into my chest at 60 ft. (18 m.).

In China some boat people use them to fish by tying a string around one foot and putting a ring around its neck so it can’t swallow a fish it might catch.  Some of these fishing Cormorants spend their entire lives with one Chinese family.