The State fish of California is the Garibaldi (Hypsypops rubicundus) and he gets his common name from an unlikely source.

Giuseppe Garibaldi of Italy.  The fish Garibaldi is the namesake of General Giuseppe Garibaldi of Italy (1807 -1882).  He is often referred to as “Hero of two Worlds” with his successful Military campaigns in Europe, Brazil and Uruguay and is considered the architect of the Union of Italy into a single state from it feudal kingdoms.  In the process throwing off Austrian domination of the peninsula. In 1833 he was sentenced to death for apposing the leadership of Piedmont and fled to South America before he lost his head.

In Brazil he fought in the Revolution (Ragamuffin War) attempting to separate the state of Santa Catarina from the rest of Brazil.  That battle failing (where he met his wife Ana) he moved to Uruguay. That is where he adopted his signature clothing a red/orange shirt, poncho and sombrero.  The red/orange shirt was to remain as the uniform of his men in subsequent battles.  Successful in Uruguay he was concerned about the state of his home Italy which was suffering much internal conflict .

Returning to Italy with some of his most trusted men in 1848 he fought again for unification but ended up fleeing once more but this time to the USA where he worked in a candle factory and his cottage there is listed in the US list of Historical Places.

After many more battles that led the formation of the Italian Republic Garibaldi is considered a father of the Italy we know today.

The California Garibaldi acquired the common name from its brilliant coloration.  When European fishermen saw the Hysypops rubicundus they called it a Garibaldi because of the memory of the Garibaldi Red Shirts.

The temperate water Garibaldi is the largest member of the Damsel fish family of fish.  They are primarily tropical and there are said to be 250 species of them.

Our California male carries the spores of specific species of algae in his cheeks and plants them on a flat rock with a nearby grotto that he can hunker down in and watch.  He grooms this algae patch during mating season and defends it against all encroaching males and algae eaters such as sea urchins.  In spring the females are up looking for algae patches to lay their eggs in as their eggs hook into the algae the male has tended.

The Garibaldi are abundant in our La Jolla Cove Ecological Reserve and whether you are scuba diving or snorkeling you are guaranteed to see them in all their glory. 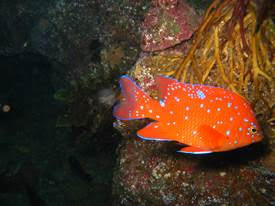 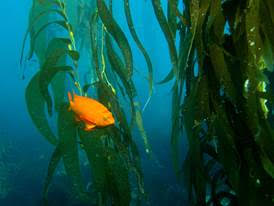 Adult Garibaldi in a stand of giant kelp. 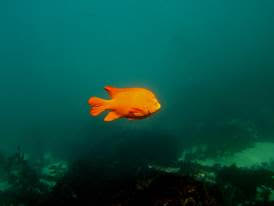 Female looking for something to eat. 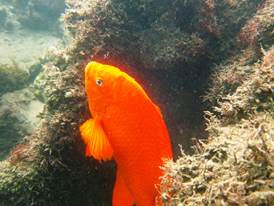 Male challenging an approaching diver to stay away from his algae patch.

We use only the finest ingredients to produce stellar tastes.